PROBLEM
The Torres Strait Islands are made up of 133 islands of which around 38 are uninhabited islands and two mainland communities located off the northern tip of Australia. Scattered over 48,000 square kilometres between Cape York and Papua New Guinea, many of the islands in the group are acutely affected by tidal erosion and storm damage along their exposed beaches.

130km northeast of Thursday Island lies Poruma Island, a small coral cay just 400 metres wide that is situated within a central group of islands characterised by their low-lying sandy composition. Due to the effects of rising sea levels and intense storm events associated with global warming, Poruma and other nearby sand islands are particularly vulnerable to loss of beachfront. This sand erosion, in turn, puts homes and infrastructure at risk of inundation and undermining, and the Torres Strait Island Regional Council are working to address these ongoing erosion issues.

In this instance, a large section of the eastern beachfront of Poruma Island had retreated over 100 metres and was now a threat to local houses and roads. The Council engaged a specialist consultant who recommended the use of a geotextile sand container to prevent the continued retreat of the coastline. GeoRock® Geotextile Sand Containers from Global Synthetics were specified as the ideal solution, used in conjunction with Profab Ultra 600X Staple Fibre needle punched non-woven geotextile.

SOLUTION
Global Synthetics supplied Georock® Geotextile Sand Containers. These were used to construct a seawall, creating a cost-effective solution to significantly reduce the economic costs of damage from wave attack.
Geosynthetic sand containers are geotextile sand-filled bags manufactured from needle-punched nonwoven geotextiles. For coastal structures and dune security, these geosynthetic sand containers provide an alternative to conventional rock materials such as riprap, gravel filters and other hard armour and aggregate solutions.
Georock® Geotextile Sand Containers conform to uneven terrain without sacrificing strength and provide an environmentally sound result by creating habitat zones and minimising site disturbance. Additionally they have long-term durability, exhibiting excellent friction properties and abrasion resistance.
This solution not only made use of the abundant supply of sand in the area, but when designed and constructed correctly, this type of seawall provides a sound and aesthetically pleasing structure to meet the required design life.

INSTALLATION
To construct the seawall with Georock® Geotextile Sand Containers, sand was excavated down to the foundation level of low strength sandstone. Then a layer of heavyweight Profab Ultra 600X non-woven geotextile was placed over the rock as a protection layer. This layer continued up the back of seawall to provide separation between the seawater and the sand interface.

Then, using the specialised construction equipment as provided by our recommended installer, the filling, compaction and placement of the Georock® sand containers was undertaken. The bags were stacked to build an efficient structure that would protect Poruma Island’s eastern beach from further erosion.

This project was a great success and the Poruma Island Mayor was satisfied with the result.
Going forward, the geotextile bags will bed into the landscape, allowing sand to move over the face of the wall during sand build-up periods. From an environmental perspective, this will assist the bags to further blend into the surrounding beach area whilst still providing a solid and effective line of defence when storm events occur. 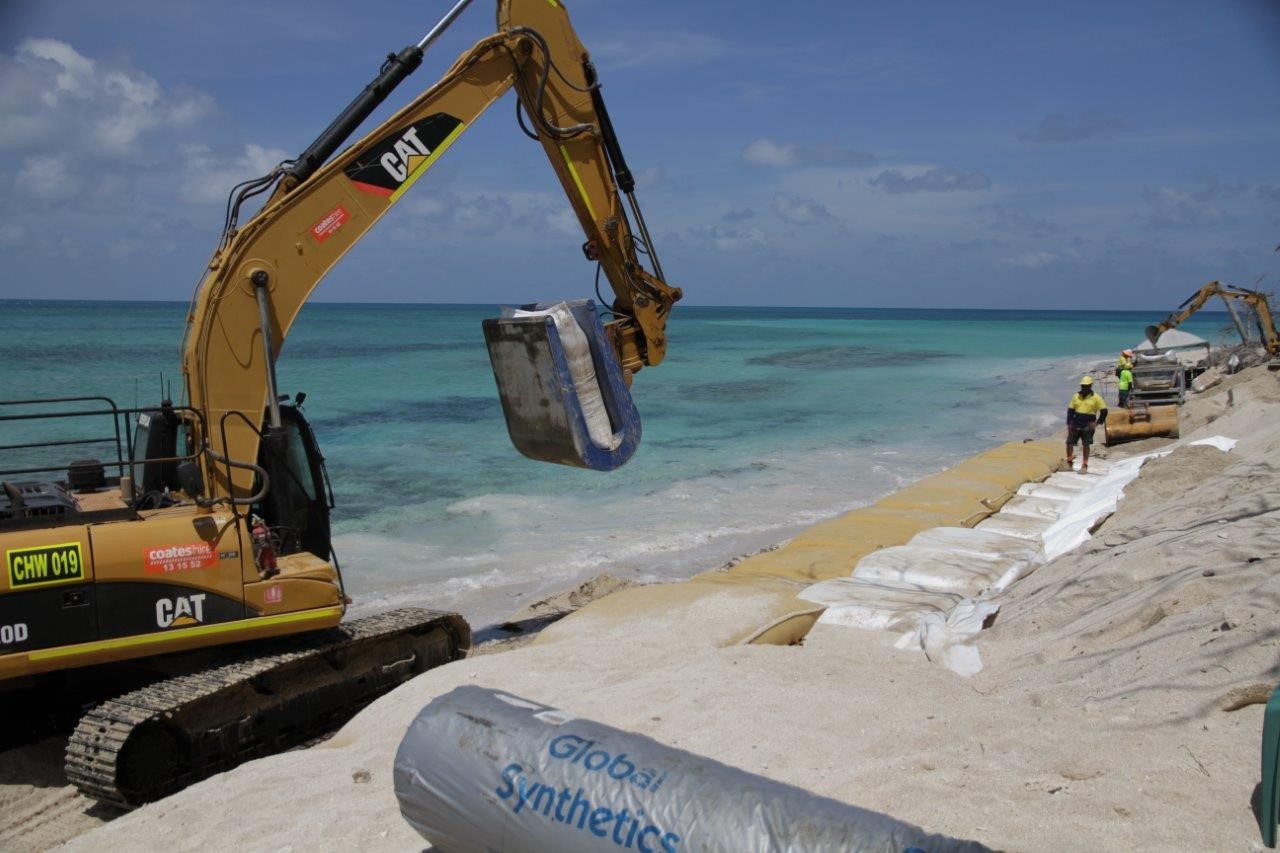